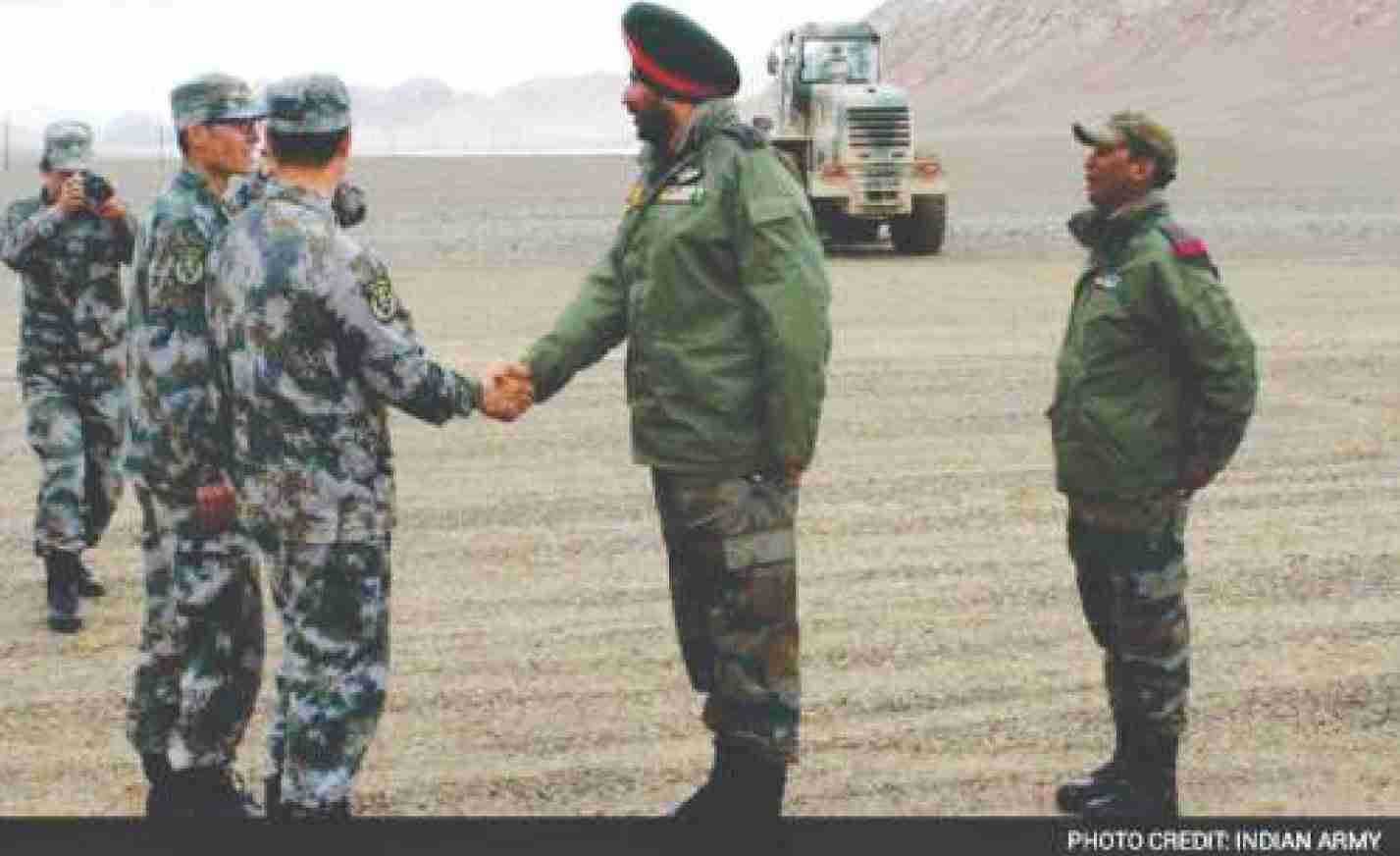 India has supported a draft resolution to identify the ‘zoonotic source’ of the novel coronavirus, and Beijing is obviously unhappy. Hence, the Chinese muscle-flexing on the LAC.

It is rare for India to be embroiled in boundary disputes with its neighbours, others than with Pakistan and China. And with both of them, the background and the pattern of escalation is predictable. But this week, a new entrant to the equation is Nepal, which for many years was taken for granted by New Delhi. However, in the last three years, anti-Indian sentiment has become quite strong in Kathmandu, after the Madhesi agitations of 2017 – demanding Constitutional reforms – that brought Nepal to a standstill. It was widely believed in Nepal that Delhi was behind it all. So, an angry and vulnerable Nepal was roped in by China – always looking to pressurise India – with the lure of funding that Nepal desperately needs.

Kathmandu has, thus, initiated what New Delhi has called ‘cartographic aggression’, with the recently released Nepalese maps that show the Kalapani and Lipulekh areas as its territory, even though these have been with India since the 18TH century and are crucial to not only India’s military defences against China on the LAC (Line of Actual Control) but also for the Kailash-Mansarovar yatris. It is thus apparent that this is all partof a biggergame being played out by China.

Ever since China came under pressure for the coronavirus mess – that has led to a worldwide human and economic disaster – Beijing has begun to challenge the international community by its aggressive messaging to Taiwan, at the South China Sea and on the Sino-Indian boundary. This is partly to convey that China will go ahead with its unfulfilled agenda to absorb territories it still lays claim on. In the case of India, China has in the past used its transgressions to pressurise India when it wants a favourable diplomatic outcome, like the summits between Prime Minister Narendra Modi and Chinese President Xi Jinping, in Bishkek or Mahabalipuram. Currently, though, it is China’s way of expressing displeasure with two recent Indian initiatives.

One is India’s recent decision to announce new norms for FDI for its neighbours. China has been added to the list now. This seemed to be aimed at Chinese companies, which are known to make predatory moves when other countries’ economic situation is vulnerable, as India’s can be in the post- COVID-19 phase. Chinese investments in Indian companies are in the range of $8 billion in brands ranging from Flipkart to Paytm and Oppo to pharma companies. China could push for more. The other is India’s decision to join a demand by 62 countries to push for anti-China initiatives at the World Health Organisation, that China must share the blame for the spread of the Wuhan virus. India has supported a draft resolution to identify the ‘zoonotic source’ of the novel coronavirus, and Beijing is obviously unhappy.

Hence, the Chinese are muscle-flexing on the LAC. Over the past week, military commanders from China and India have engaged in talks to bring down tension on the Sino-Indian boundary along the LAC in Ladakh facing the Aksai Chin region, near the Pangong Tso Lake. It was here that troops of both countries came to blows two weeks ago, and even now tensions are high in that area compared to Sikkim, where altercations between troops had also taken place. But India is no military pushover anymore, as China learnt to its embarrassment most recently during the 72-day Doklam standoff.

The current standoff seems to follow the opposite pattern of the Doklam standoff. While itwas India that had objected to the Chinese construction of a road in the Doklam plateau, near the Sino-Indian boundary in Sikkim – in the current standoff it is China that has raised  objections  to  the  construction  of  a  road,  by India in Ladakh – in the Galwan river area, about 200 kilometres north of the Pangong Tso lake. This is an area that has remained with India, even during and after the 1962 borderconflict.

In fact, the roots of  the 1962 Sino-Indian border conflict can be traced to the Chinese occupation of the Aksai Chin area – that lies east of Ladakh – in the 1950s. The  Chinese,  however,  claimed  it  was  the  Indians troops who were ‘nibbling’ into their territories when in   reality   it  was   Chinese   troops  who   had   been patrolling  even  beyond  their  agreed  boundaries  in Aksai  Chin  through  the  1950s.  Indian  troops  were however  restrained  in  showing  their  presence  over Aksai Chin, in the 50s. “It is perhaps worth pointing out that at that time the Chinese claim over Aksai Chin was precisely that – there were no checkpoints at Aksai Chin to suggest that the territory belonged to India,” noted  the  late  eminent  strategic  affairs  thinker  K. Subrahmanyam.

Moreover,  when the matter was brought to the notice of  Pandit Nehru’s government, they chose to ignore it. Eventually, when the matter became public knowledge,  India stepped its patrolling. This led to disagreements over the boundary in Ladakh and the then   North-East   Frontier  Agency  (NEFA,   now Arunachal   Pradesh),   and thus,   China eventually attacked India’s ill-equipped and ill-prepared troops on the front lines in October 1962. The rest, as they say, is history.

The other area of current Sino-Indian standoff is on the Sikkim part of the LAC. It was near this area that the Doklam standoff some years ago had become an embarrassment for China, as India troops refused to blink. In this context, an earlier incident in 1967, near Nathu  La and  Cho  La is worth mentioning.  As the Chinese troops challenged the Indian Army’s efforts to lay barbed wires fencing on the agreed boundary in Sikkim, in September 1967, Indian troops refused to back off. It eventually led to a heavy exchange of fire – with machine guns,  mortars and artillery  –  at the orders of   Major  General  Sagat  Singh  (who later liberated Dacca). It left a few hundred dead on both sides, but the Chinese backed off. The Chinese had learnt that the Indian Army was no longer the political pawn that it was in 1962.

No wonder, those in the know of these facts, know that China respects you if you talk from a position of strength, as the Somdorung Chu incident of 1987 had led China to ask for talks to agree on an alignment of the   LAC.   In response to   China’s intrusions in Arunachal Pradesh, troops were rushed in (under a military exercise,   Op-Chequerboard)   by   General Sundarji,  in  April  1987.  Two brigades  (over  3,000 troops) were flown in by helicopters from the Assam plains to Somdorung Chu valley and they surrendered the Chinese. It had so rattled the Chinese that they soon asked for talks.

Thus,  during the eighth round of  Sino-Indian border talks in November 1987, a decision was taken to upgrade the talks from the bureaucratic to the political level.  And in  1998, a Joint Working  Group (JWG) was set up to discuss, among other things, the alignment of the LAC. However, these efforts have had little progress as the repeated  Chinese boundary intrusions have shown.

It is well-known that China has used Pakistan to be its frontman in Kashmir for decades. China’s interests in north and east of the Kashmir and Ladakh is essentially to garner whatever water resources it can for its development agenda. And now it has a newfound friend in Nepal, in its boundary games. With Kathmandu’s leanings towards Beijing becoming stronger in recent years – as Beijing buys out support with its deep pockets – the rise of anti-India sentiment is visible among Nepalese politicians.

As an economically stretched Kathmandu sought financial bailouts, it was the Chinese that roped Nepal into joining their Belt and Road Initiative. This led to Chinese promises of investing money into the country – like it has done with the CPEC in Pakistan. But Chinese investments come with stringent financial and territorial implications, like Sri Lanka and the Maldives know!

For Nepal, the payback price is perhaps to needle India for now with its latest map-making effort with its claims on Kalapani and Lipulekh areas, on the junction of the Nepal-India-China border. Kathmandu now says this area belongs to Nepal and has recently released Nepalese maps that show them as such. However, India’s claims are based on earlier maps of 1879 that were acceptable to both sides until now. This shows these areas belong to India.

Moreover, India too had recently published maps, some months before the Nepalese ones, showing these areas India’s. This area has been an agreed meeting point on the LAC for Sino-Indian troops and apart from it being a site for border meetings and trade, India has built a new there for the Kailash-Mansarovar pilgrimage. It would be logical to infer a Chinese role in this controversy.

China said today that Indian and Chinese troops have started implementing the “positive consensus” reached by the senior military officials of the two countries on June 6 aimed at “easing” the situation along the Line of Actual Control. The Chinese Foreign Ministry spokesperson’s remarks came a day after officials in New Delhi suggested that armies of India and China have undertaken a “limited disengagement” in a few areas in eastern Ladakh in a demonstration of their intent to end the boundary standoff peacefully ahead of another round of military talks on Wednesday.

Sources said that the two armies “disengaged” at three locations (Patrolling Point 14), Patrolling Point 15 and Hot Springs (Patrolling Point 17) by 2-2.5 kms. Talks have been underway at the military level as well led by Lt Gen Harinder Singh, commander of the 14 Corps from the Indian-side and Maj Gen Liu Lin of the Southern Xinjiang Military District from the Chinese side. Sources said the PLA’s military mobilization, which includes air defence radars, fighter bombers, rocket forces and jammers are “worrying” which has been “mirrored” by India on its side. Army said a complete withdrawal and maintaining a status quo to pre-May 5 level will require primarily diplomatic effort and long and multiple military talks at the Divisional Commander (Major General), Brigade Commander (Brigadier) and Battalion Commander (Colonel) level.

ONLY PAK ARMY CAN SIGN OFF BOMBS, warns …… Maroof Raza